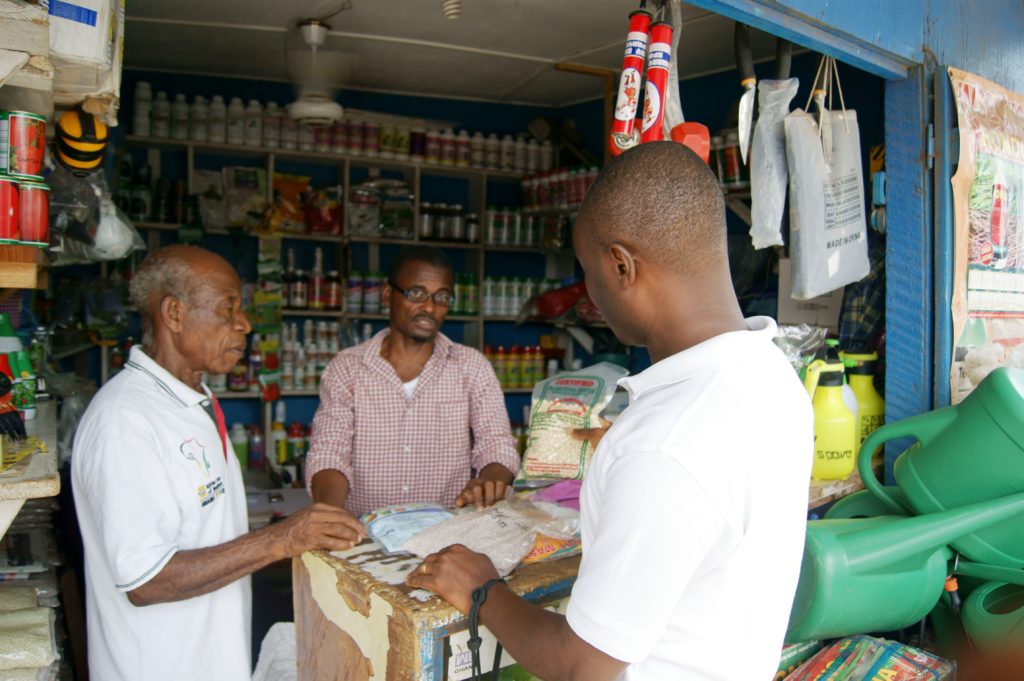 Farmers Seeking Information from an Agrodealer

The use of improved input technologies, particularly fertilizers, remains low in much of sub-Saharan Africa (SSA) despite spirited efforts at continental, regional, and country levels (Figure 1). 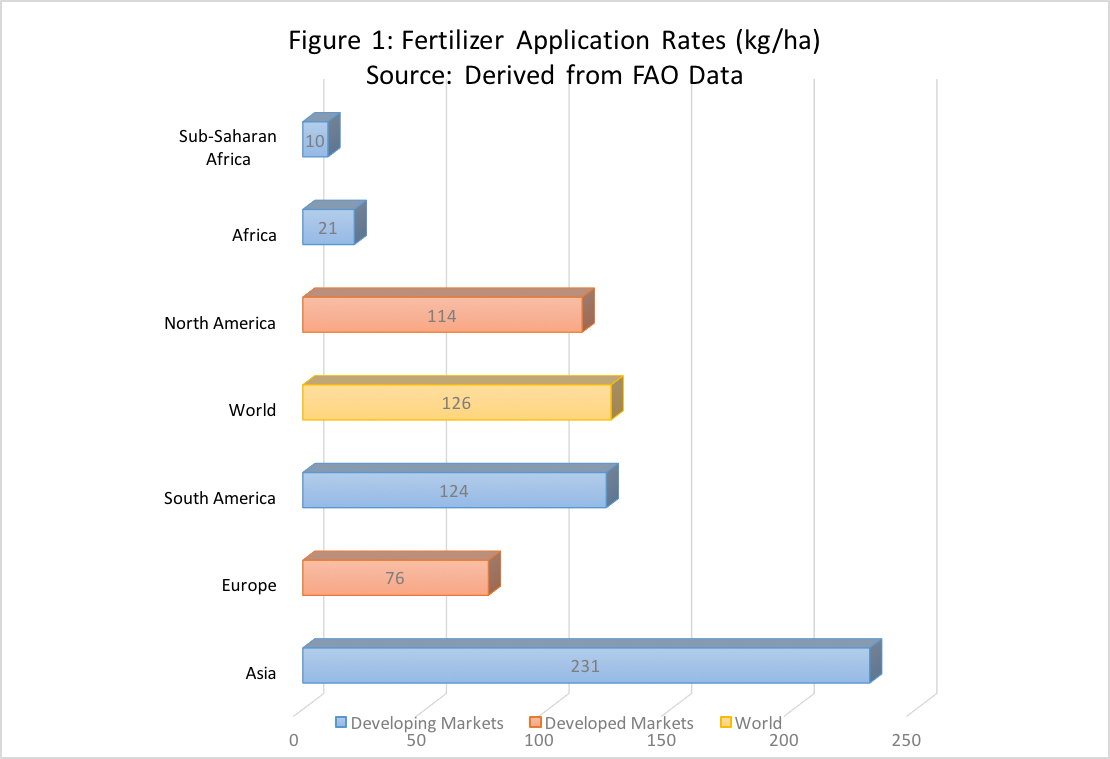 However, pockets exist where some progress has been achieved, and fertilizer use rates and agricultural productivity have increased significantly. It can also be seen that, unlike in SSA, overuse of fertilizer is a major issue in many areas in Asia. So what has worked and what remains to be done to accelerate judicious fertilizer consumption on the continent of Africa and particularly in SSA?

Several approaches have been attempted by various SSA countries to deal with low rates of fertilizer adoption and application. A number of countries have adopted state-managed fertilizer value chains without significant success. In such cases, governments have been the only source of fertilizers for the local markets, with importation and distribution undertaken solely by government agencies. Though this approach led to an immediate increase in national fertilizer consumption, it was sometimes skewed to areas with larger farmers who were already using fertilizers. As a result, the agriculture sector did not get the expected boost that could have occurred from targeting farmers who were on a lower production curve. This realization, coupled with the budgetary constraints facing these countries in meeting other competing investment priorities, led some countries to reconsider and change tactics.

To reach smaller farmers and to ease budgetary pressures, some countries opted to invite the private sector to participate in the fertilizer markets as importers or distributors working with state agencies, who controlled retail prices or margins accruing to private traders. A few variants emerged from the above systems, with most focused on satisfying national food security by supporting resource-poor farmers to increase production. One such system consisted of two parallel and competing value chains dominated by the private sector and public sector, respectively, with the latter selling fertilizer to farmers at subsidized prices while, paradoxically, the former was expected to survive by selling theirs at market prices. Though the subsidy was targeted at resource-poor farmers, due to implementation challenges, subsidized fertilizer was often purchased by commercial farmers who were serviced by the private sector, therefore “crowding out” the latter. This contradictory arrangement failed to work, as the private sector was crowded out of the market by cheaper state-subsidized fertilizers, defeating the purpose of expanding access to inputs for most farmers.

The previously mentioned conflict led to a system that merged these parallel chains with the private sector, as the major player, also undertaking the subsidy responsibilities on behalf of the government. In turn, the private sector was reimbursed by the state for fertilizers supplied at lower prices to targeted beneficiary farmers, while selling at market prices to the rest of the commercial farmers.

Other systems emerged, driven by political considerations, in which the state would occasionally import fertilizers and distribute it nationally at subsidized prices to any farmer who could afford to buy at the subsided price. As expected, this action undermined the private sector value chains supported by the same governments to provide sustainability to the system and reach more farmers.

This amalgam of input subsidy programs (ISPs) depicts the apparent confusion and uncertainty created by decisions and strategies made by governments that are misguided by information based on poor (or lack of) evidence, vested interests, and/or political considerations.

However, there are some bright spots amid the many subsidy experiments. One such success case has been well documented by Michigan State University (MSU) and the International Fertilizer Development Center (IFDC) on the Kenya fertilizer policy reforms of the late 1990s, which ushered in an impressive increase in fertilizer consumption, an increase in maize production, and a reduction in distances from farmers to retail stores. The major driving force was government efforts to create an enabling environment for private sector investment. This not only led to a short-term increase in fertilizer use, but it also built a long-term private sector infrastructure that has helped sustain the fertilizer market, increasing fertilizer consumption to over 500,000 metric tons (mt) from an average of 220,000 mt during the time of pre-reform in the 1990s. As a result of increased competition, real fertilizer prices declined due to changes in domestic marketing margins between import (Mombasa port) and fertilizer consumption points in farming areas (Nakuru) even when global prices spiked in 2007/08 (Figure 2).

Though this strategy has and continues to face many challenges emanating from direct and indirect government intervention in the market, the private sector has remained a major player. However, if government market participation keeps growing, this success story may follow the path of the all-familiar scenarios explained above.

So what can be done, with this back and forth between market forces and state control, the confusion and reducing investments by the private sector, and the inability of governments to develop efficient fertilizer markets? It is not just researchers and development organizations asking these questions, but governments themselves have come to this realization and are trying to move forward based on lessons learned. The continuum of proposed solutions includes: i) government going it alone; ii) letting the private sector be the only player in the market, and iii) both private and public sector partnering to build a sustainable fertilizer market. Even those who advocate for state-run markets know that such arrangements are not tenable and cannot serve all farmers well without such programs incurring unsustainable costs. The prominent consensus is to let the private sector run the markets with the government’s participation focused on providing relevant regulatory oversight to ensure quality is maintained and on creating a policy environment that will ease or eliminate challenges (e.g., tariffs and non-tariff barriers) that agribusinesses encounter in registering and operating in these countries.

If the right policy environment exists, where rules of engagement and incentives are clear, then fertilizer markets should thrive. Efforts to reform the existing environment are being driven by a number of propositions: i) improve the design and implementation of subsidy programs or replace them with alternative social support programs or other measures to increase accessibility to fertilizers; ii) reform the policy and regulatory frameworks to allow private sector growth in fertilizer markets, and iii) a nuanced combination of the two.

The most visible public policy initiatives to encourage increased adoption and use of appropriate fertilizer technologies have mostly been limited to providing fertilizer subsidy programs. But these programs, for the most part, have not achieved their objectives. Subsidy programs in SSA have faced a number of shortcomings, including poor targeting of beneficiaries, the high cost of implementation, unsustainability occasioned by overdependence on donor funds, supply of incorrect fertilizers vis-à-vis soils and crop types, and delayed delivery. Under these conditions, returns and costs are often not what is expected, and as a result, there is a significant push for improvement or identification of alternative approaches for developing sustainable fertilizer markets. 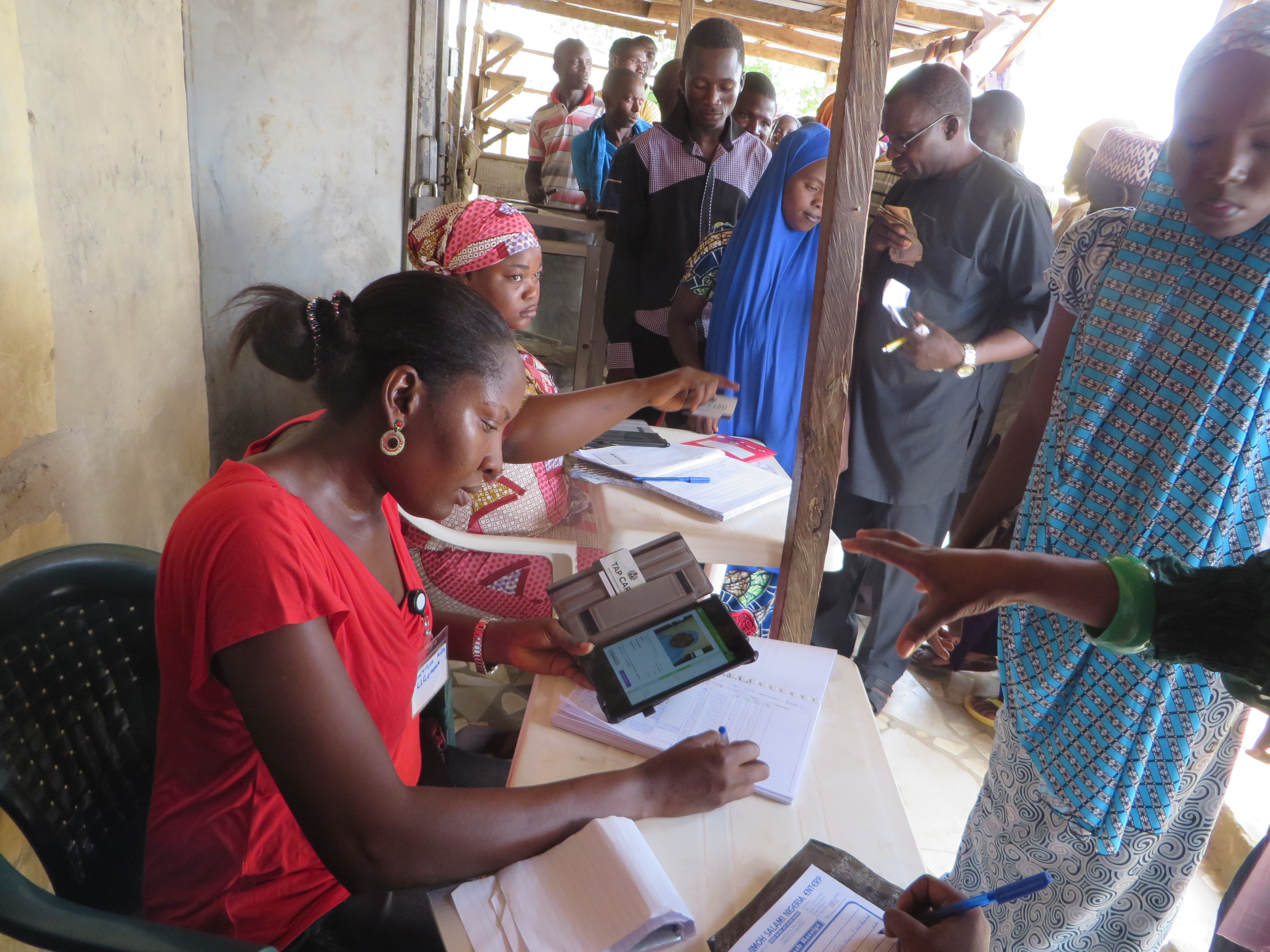 The policy reform process has received momentum from a number of quarters. Evidence from surveys conducted in SSA shows that fertilizer policy and regulatory frameworks are outdated or obsolete. Following the African Union’s Comprehensive Africa Agriculture Development Programme (CAADP) 10th anniversary celebrations in Durban in 2014, a consensus emerged that these frameworks need to be revamped and updated to meet the changing global and domestic economic environments. This process for change is echoed at regional and country levels and also includes discussions on how to improve subsidies so that they support private sector development. In 2012, the Economic Community of West African States (ECOWAS) signed a fertilizer regulatory framework. Similar efforts to harmonize policy and regulatory frameworks to improve trade are being forged by other regional blocks and countries with technical support from IFDC and other institutions, including the African Fertilizer and Agribusiness Partnership (AFAP), MSU, and the International Food Policy Research Institute (IFPRI).

This reform process requires all key stakeholders (policymakers, importers, distributors, farmers and farmer associations, development partners, and others) to share experiences, learn from each other, and base decisions on evidence presented through public-private dialogue and other stakeholder forums. A number of these forums are ongoing as others are being built across SSA to provide the additional boost to move these policy reforms forward. These forums are also important gateways to build capacity of stakeholders in financial services or agronomic aspects (including AFAP’s efforts to ease access to finance through Agribusiness Partnership Contracts [APCs] and IFDC’s capacity-building programs for agro-dealers) and linking farmers to markets in order to build demand for fertilizers.

IFDC and others are working toward building coalitions and public-private partnerships (PPPs) to support this reform process by providing expertise to update relevant documents, advocating for change with key policymakers, and promoting legislative efforts supportive of agriculture sector development. There are several international manufacturers and importers who have made significant investments in SSA to increase supply of fertilizers in the region, including establishing blending facilities. These firms need environments that will protect their stakes in the region, or they will divest and leave the region if uncertainty prevails, incurring losses in the process. It is noteworthy that the resistance to change has diminished over time as policymakers and other key stakeholders have had the opportunity to review the relevant evidence for change. The AU’s CAADP Compacts signed with SSA countries are meant to provide the backbone to establish a continental framework supportive of the agricultural transformation agenda, of which fertilizer markets are an integral part. With these in place, and with the recent successes such as in Kenya, the future fertilizer policy outlook for SSA is encouraging.

This article originally appeared in the January/February edition of Fertilizer Focus.