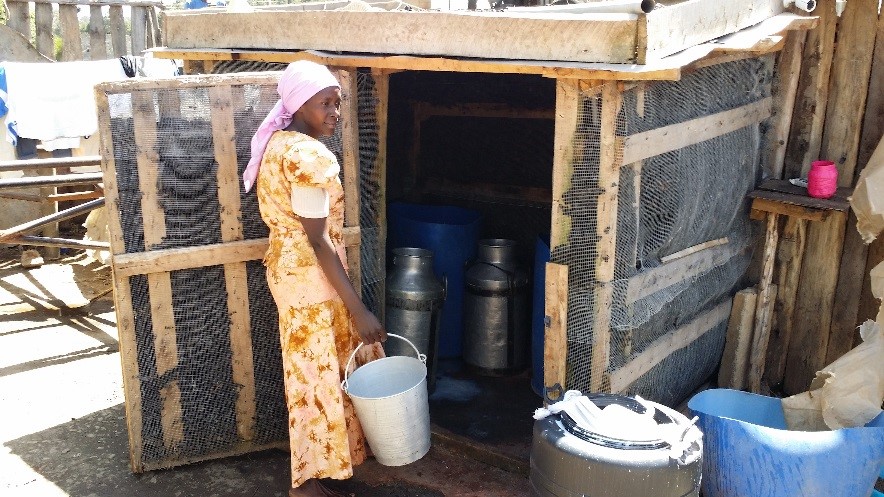 Technology innovation promoted by IFDC’s 2SCALE project is helping dairy farmers in Kenya keep their milk fresh, even without refrigerators or electricity.

Milk collection logistics are a major challenge for both farmers and processors. Cows are generally milked twice a day, morning and evening. The evening milk, in particular, is susceptible to spoilage and bacterial contamination. 2SCALE dairy farmers in Kenya, like those elsewhere, suffered substantial losses because they lacked refrigeration facilities.

The charcoal cooler is a simple box, about 2 x 1.5 x 1.5 meters, built of a wooden frame and chicken wire. The walls are essentially a six-inch thick layer of charcoal pieces held together by wire mesh. Water is sprinkled on the charcoal to keep it continually moist. The moisture evaporates, creating a cooling effect.

The degree of cooling depends on ambient temperature, airflow and other factors, but is strong enough because only a small volume needs to be cooled. Milk cans placed inside the cooler remain at below 10 degrees overnight, ensuring that no significant degradation occurs before the milk is transported to the processing center the next morning.

A small cooler sufficient to store four 50-liter milk cans (sufficient for small-scale dairy farmers) costs about $ 130 to build, including material and labor.

Field testing of the new coolers began in August 2016, with farmers in three clusters. The results were dramatic – spoilage on evening milk fell from over 50% to less than 5%. Investment in a cooler pays for itself in less than 3 months.

Local artisans have been identified, and will be trained in 2017 on how to build the cooler and the piping system. Partner firm Eldoville Dairies is helping to promote the new cooler among its farmer-suppliers. Several hundred farmers now want to acquire coolers; project teams are exploring funding options (involving Eldoville, microfinance agencies and farmers’ savings groups or SACCOs) that will allow farmers to pay for coolers in installments.