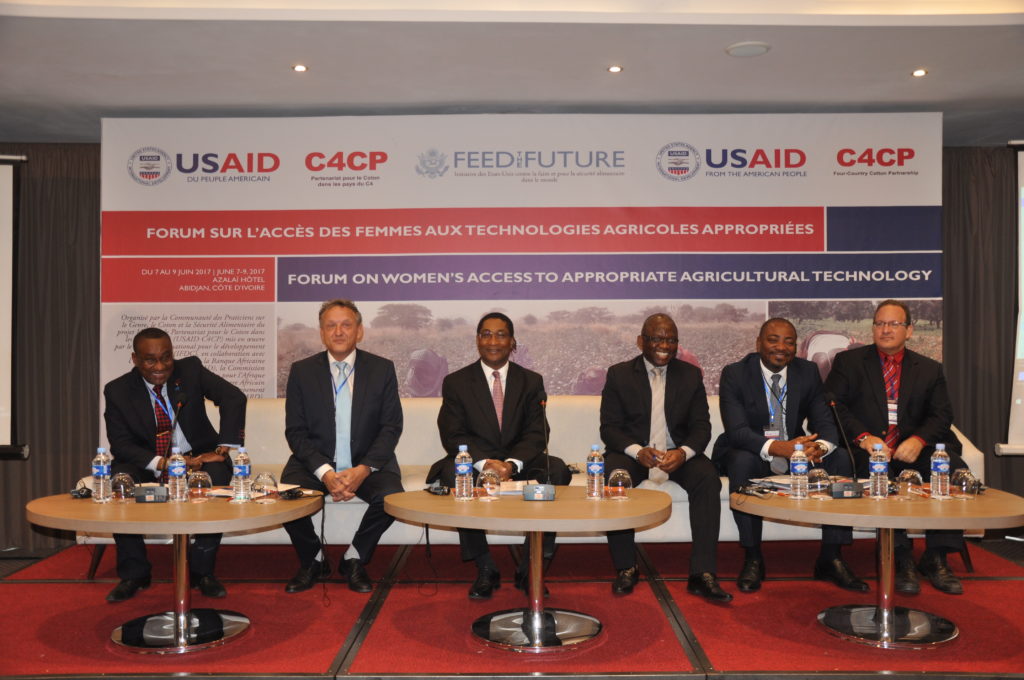 June 7, 2017 – Abidjan, Côte d’Ivoire – The Four-Country Cotton Partnership (USAID C4CP) a project implemented by the International Fertilizer Development Center (IFDC) and funded by the United States Agency for International Development (USAID), in collaboration with the African Union (AU), the African Development Bank (AfDB) and the West and Central African Council for Agricultural Research and Development (CORAF/WECARD), is organizing the forum on Women’s Access to Appropriate Agricultural Technology, from June 7 to 9, 2017 at Azalaï Hotel Abidjan, Côte d’Ivoire.

This forum, spearheaded by the Community of Practice on Gender, Cotton and Food Security of the USAID C4CP project, has an overall objective of discussing current and future mechanisms to facilitate improved access and adoption of appropriate agricultural technologies and innovations for female farmers and processors in the region.

Specifically, the forum will:

Over 100 participants drawn from the West African region will attend this forum, with a specific focus on the C-4 countries. Regional organizations such as the African Union (AU), African Development Bank (AfDB), United Nations Economic Commission for Africa (UNECA), Economic Community of West African States (ECOWAS), West Africa Economic and Monetary Union (WAEMU) as well as members of the Community of Practice on Gender Cotton and Food Security will also be present. Coordinators of the ECOWAS agriculture policy (ECOWAP) as well as female producers and processors will be invited to share their experiences.

IFDC is a not for profit international organization which enables farmers in developing countries to increase agricultural productivity, generate economic growth, and practice environmental stewardship by enhancing their ability to manage mineral and organic fertilizers responsibly and participate profitably in markets.

Four-Country Cotton Partnership (USAID C4CP) is a four-year (2014-2018) $14.8 million project funded by the United States Agency for International Development (USAID) and implemented by the International Fertilizer Development Center (IFDC) aimed at improving food security in targeted areas of the C-4 countries (Benin, Burkina Faso, Chad and Mali). The strategic objective of the project is to increase the incomes of male and female producers, as well as cotton processors in targeted areas. USAID C4CP focuses on cotton and rotational crops, mainly cereals and legumes.

The Community of Practice (CoP) on Gender, Cotton and Food Security is a voluntary platform for experts, male and female farmers and processors, aimed at promoting exchange and actions for the integration of gender and the empowerment of women in agriculture, including cotton production and its potential for food security. The CoP provides a platform which facilitates linkages and information sharing among stakeholders, organizations, networks, projects and programs operating in this domain at the continent level.