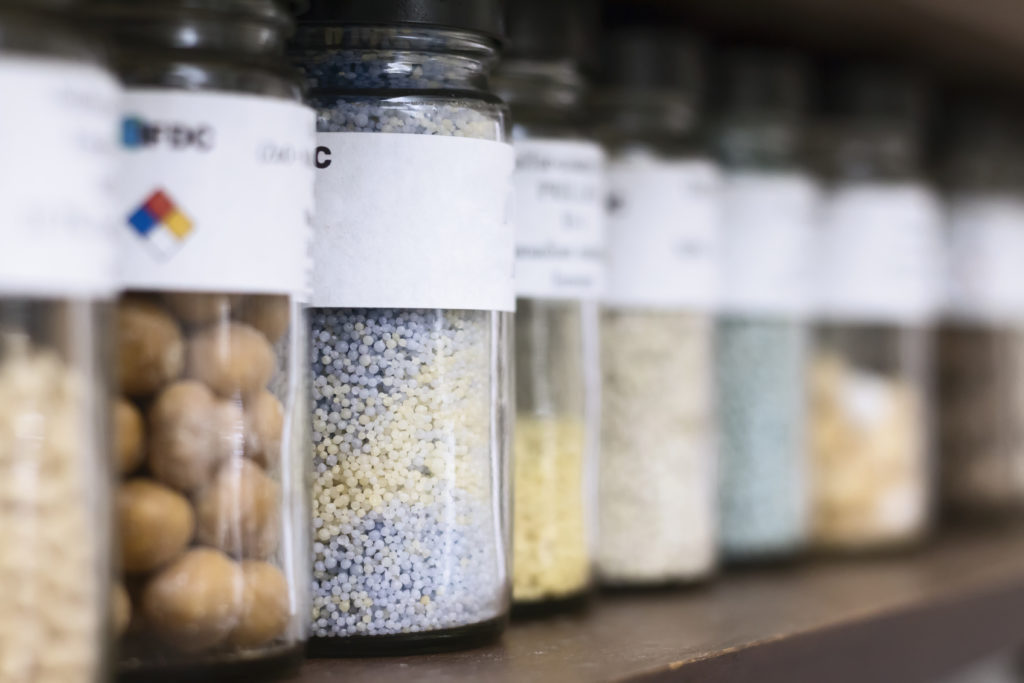 Fertilizer products on a shelf As highlighted in recent reports, these nutrients perform individual as well as coordinated functions in crop physiology and development. For example, some regulate enzymatic activities because certain enzymes require them to function properly. Others play a role in the formation of chlorophyll, the green pigment of plants; in photosynthesis; in cell wall and membrane structural integrity; and in the metabolism of carbohydrates and nitrogen. Ultimately, these functions result in observable agronomic outcomes.

Unfortunately, many soils around the world suffer from one or more micronutrient deficiencies. Applying these nutrients is increasingly being demonstrated to stimulate agricultural productivity. Notably, when specific micronutrients are added to crops that have been fertilized with nitrogen (N), phosphorus (P), and/or potassium (K), additional effects on growth and yield are observed. Taken together, these benefits make micronutrients strategic in fertilizer innovation, not just for enhancing yield, but also to potentially minimize pesticides and nitrogen fertilizer footprints in the environment.

The extent to which each micronutrient influences agronomic outcomes is dependent on its concentration in soil, but in general, the more lacking they are in soil, the greater the response their addition evokes in the plant. As a quick fix, individual micronutrients can be applied to crops to promptly address specific deficiency symptoms. However, the strategic use of micronutrients in fertilizers can be viewed in the context of balanced fertilization, where macronutrients (N, P, and K) form the basis of fertilization with the supplementation of one or more micronutrients, to generate a comprehensive fertilizer regime that addresses systems-level crop responses. Such balanced fertilizer regimes should, of course, be based on the results of soil and/or plant tissue testing to determine nutrient levels and associated soil and crop needs.

The relative effectiveness of each micronutrient is determined by how it is packaged and delivered to plants. The most common packaging methods are as oxides (particles) or sulfates (salts). Oxide forms are typically cheaper than sulfates, but are not as readily available to the plant. More recently, packaging as nanomaterials using oxide particles that are far smaller in size than regular oxides is being studied, with positive effects observed in crops. Differences in crop responses to packaged forms depend mainly on the rates of dissolution and availability of the active nutrients. However, regardless of how they are packaged, micronutrients can be delivered to crops either via soil or foliar treatments.

This dual possibility is convenient because many of the root biological processes requiring micronutrients to function, as well as the transport mechanisms of micronutrients into the plant cell, also happen in leaves.

Of the micronutrients, Zn is, arguably, the most critical for the society and environment. Zn deficiency in soil is increasingly linked to human Zn deficiency, which is a serious health concern in many parts of the globe, especially in areas where staple food crops grown in nutrient-poor soils form the major diets. Little Zn is used in fertilizers in today’s agriculture, compared to its use in other industries. Therefore, expanding the Zn market beyond non-agro uses would promote its use in agriculture more, allowing its full socio-environmental benefits to be realized.