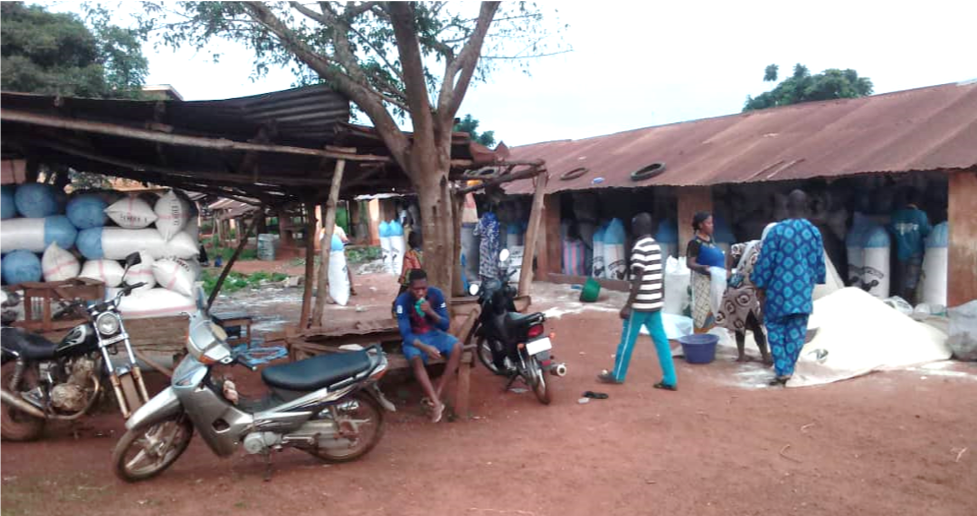 IFDC’s ACMA program in Benin has assisted cassava producers and those who process it into gari (cassava flour) located in Kétou, a municipality of Plateau Department in Benin. Over the course of the project’s two phases, these beneficiaries have learned to sell their product in bulk, and by doing so, better market their product.

“Previously we used to work each one on his/her side, and each of us used to sell our gari any way we could, either through buyers found in the market, on the spot by the collectors, or on the regional market of Ikpinlè where Nigerian buyers usually come to stock up,” testifies Pierre, a cassava processor from Kétou, speaking of the period before ACMA’s arrival in Kétou.

After diagnosing cassava processors’ usual procedures, ACMA found that apart from the actors producing and processing cassava, there are other actors who sometimes ensure the transport of cassava to the processing units, and of gari to the markets. The diagnosis also allowed contact with the Union of Agricultural Producers, which was formerly installed by the Beninese government. These actors were invited to workshops, which ended up giving birth to the Cassava Agricultural Business Cluster (ABC). This cluster, after receiving training, has adopted collective marketing, a mode of marketing agricultural products, which aims to restore a balance in the commercial relationship between producers and buyers. This has made it possible for all actors to cooperate through a better organization of the value chain.

“The ACMA program has trained us on production standards and gari production techniques, such as in processing steps, hygiene, and understanding of production costs. We understood the importance of getting together to look for the best market; beyond training, ACMA has supported us to build credit as working capital to finance our activities. For us women? It is a real relief,” said Salimenta Abèkè, a female cassava processor in Kétou.

Overall the products of the actors have improved and the quantities of processed gari has increased.

Now all the individual entrepreneurs are putting their products up to standard and marketing them together. To support agricultural economic actors in this dynamic, municipal authorities also show involvement and offered better availability. All this creates a real transformation of these actors of Ketou’s cassava ABC.

They decided to look for more buyers for their gari aside from the Ikpinlè market they have always frequented. Having made exchange visits and looking for better opportunities, they found buyers from Malanville in northern Benin, with whom they were linked. They have already sold tens of tons of gari to these buyers. Further, they decided to create marketing spaces for their gari in the Kétou market. Thus, the transformed actors of the gari cluster become a single interlocutor, a single voice to negotiate a fair price for their products and get out of a relationship of economic dependence where the rules of the game are dictated unilaterally by buyers. It is a win-win situation for all actors

The benefits of collective marketing are numerous for all stakeholders in the value chain. It has significant advantages for buyers, processors, distributors, and producers, as well as for consumers: optimal price/quality ratio, access to higher volumes, guarantee and ease of supply for buyers, quality control and product consistency, and streamlining of marketing costs, to name a few.