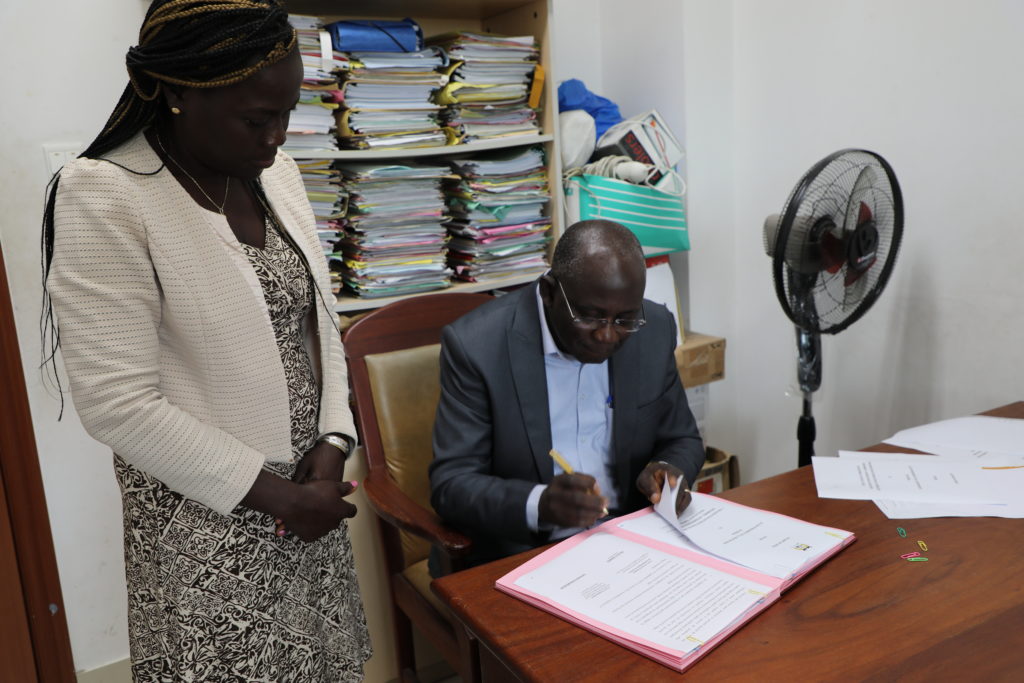 September 24, 2019 – Cotonou, Benin –The establishment agreement between the International Fertilizer Development Center (IFDC) and the Republic of Benin was renewed on September 24, 2019. This is the conclusion of a long process marked by, in addition to project reports, a field visit of the inter-ministerial committee in charge of the renewal of the establishment agreements in Benin. The committee observed the various achievements of IFDC in the field and met with the actors of the Agricultural Business Clusters (ABC), the beneficiaries, to get their impression about IFDC’s interventions. This mission, carried out August 7-9, 2019, brought the committee to Avrankou, Ifangni, Sakété, Adja Ouèrè, Pobè, Ouinhi and Bohicon.

In the commune of Avrankou, the committee visited the fish smoking unit in Gbagla Ganfan and the 150-ton palm oil storage and sale center in Kouti. In the commune of Ounhi, the 500-ton capacity maize storage warehouse and the modern pilot cassava-to-gari processing unit of the Women’s Group Mèdjro were visited. The delegation also visited the 300-ton capacity Sakété palm oil storage and sale center, Adja Ouèrè’s 1000-ton gari storage, and the Pobe maize park 2000-ton capacity storage warehouse. The final stop on the field visit was the Federation of Producers’ Unions of Benin’s (FUPRO) 1000-ton capacity maize storage with its facilities. At each stage, ABC actors expressed their satisfaction to the delegation.

IFDC is a public international organization addressing critical issues, such as soil fertility, international food security, the alleviation of global hunger and poverty, environmental protection and the promotion of economic development and self-sufficiency, through the use of agricultural technologies including fertilizers and other inputs.