Microdosing: Boosting Yields and Producing Hope in the Town of Beer 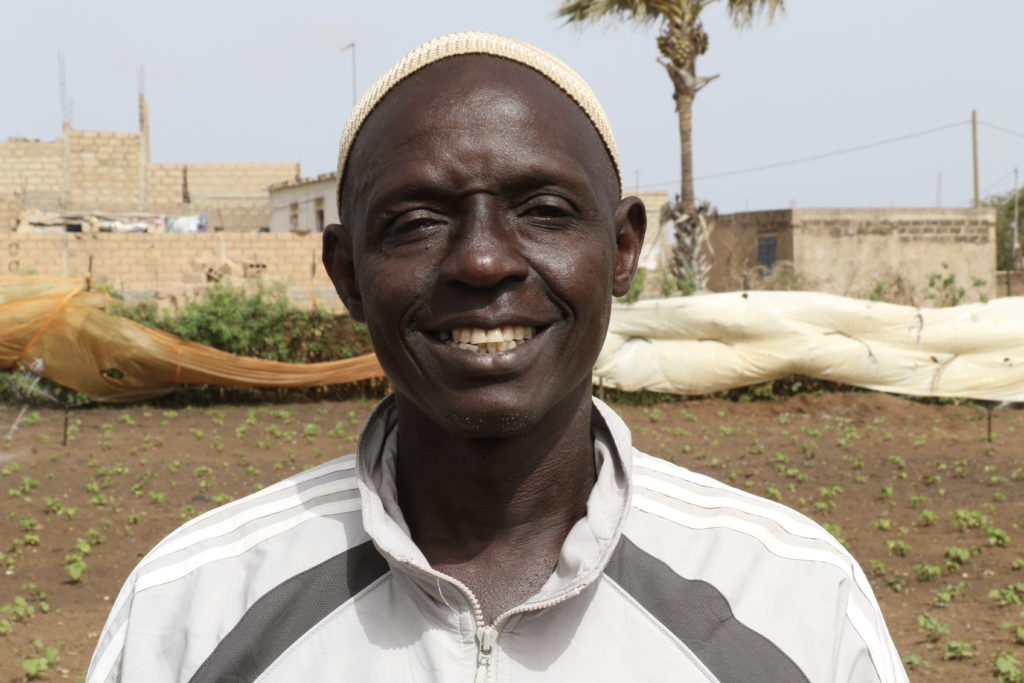 Beer is a small town in Thiès Region, 70 km east of Dakar. Located in the Niayes, Beer is the main horticultural production area of Senegal, as the village is home to many market gardens. Hundreds of men and women in Beer plow their fields throughout the year to produce vegetables and other crops, but something was about to change for them.

Abdoulaye Diouf, a 58-year-old farmer and father of eight, owns a 1.5 ha plot of land. Despite losing  6 mt of potatoes and 4 mt of onions during the previous season due to COVID-19 restrictions, Abdoulaye remains confident and continues his work enthusiastically. The reason is microdosing, a technology newly introduced in the area by the Feed the Future Dundël Suuf project, which allows him to considerably reduce his fertilizer-related expenses and significantly improve his yields.

The technology is inexpensive and well suited to cereal crops, maize, millet, and sorghum and some vegetable crops, such as okra, tomato, and eggplant. Microdosing replaces the practice of broadcasting (applying fertilizer on the ground or in rows) over an entire field.

This fertilization technique consists of putting small amounts (doses) of appropriate mineral fertilizers into the seed holes of a crop, commonly called pockets. It was introduced in the Niayes by the U.S. Agency for International Development-funded Dundël Suuf project, implemented by IFDC in partnership with the National Agency for Agricultural and Rural Advice (ANCAR), which provided training to producers in the area. In Beer and the Niayes, microdosing has increased crop yields by more than 20% according to data collected by ANCAR in 2020.

Abdoulaye is a farmer leader of the Union of Market Garden Producers and Integrated Pest Management, which has some 200 members. He farms 12 months out of the year thanks to a sprinkler irrigation system that he installed on his farm. Abdoulaye is all smiles when he talks about the microdosing technology that he just adopted: “I am so happy to use this technology, and everyone in Beer is enthusiastic today.” He notes that all the producers in his association have shown interest in using microdosing.

“We waste fertilizer, but our objective is to preserve our soils and increase yields.”

“We waste fertilizer. Instead of using 10 kg, for example, we usually use 50 kg. Our objective is to preserve our soils and increase yields, and this is what microdosing allows us to achieve,” says Abdoulaye.

As an illustration, the farmer leader explains, “I used to use up to 2 mt of fertilizer on my perimeter, which is 500,000 CFA francs spent just on fertilizer.” To reduce these costs, Abdoulaye and 150 other farmers in his group are fighting for the scaling up of microdosing technology in their area. “For any farmer, when you see your interest somewhere, you pursue it without hesitation,” he says.

While the restrictions of COVID-19 have prevented the 2020 results in Beer and Niayes from being verified, results from the scaling out of microdosing other West African countries have shown great promise. Thanks to microdosing, farmers apply 75 to 80 percent less fertilizer while experiencing additional yields up to 1,352kg/ha for crops such as millet and sorghum.

The introduction of microdosing in Beer and the Niayes is seen as a lifeline for many producers who are sometimes cornered by the financial institutions that grant them credit for the purchase of agricultural inputs every season.

Only two months after practicing microdosing technology for the first time in his market garden, Abdoulaye Diouf beams with pride. In June, his garden produced so much that he harvested five times in a two-week period. In the area where microdosing technology was used, Abdoulaye harvested 145 kg of okra, as compared to 85 kg where he continued to use the traditional farming practice. The results are clearly visible. “Every three days, I harvest. For today’s harvest, I expect to have at least 100 kg, if not more,” he says with a smile. At a price of 500 CFA francs per kilogram of okra, Diouf will be earning more for the remainder of the harvest season.

“Thanks to the Dundël Suuf project, I was able to get fertilizers and seeds,” says the market gardener, who believes that he will no longer need to go into debt to buy fertilizers with the substantial savings linked to microdosing. Because of the microdosing technology implemented by Dundel Suuf, farmers like Abdoulaye will experience increased yields with less financial investment. Keep following the project here and on social media. You can find the project on Twitter at @FtF_DundelSuuf, or discover Feed the Future Senegal Project Dundel Suuf on LinkedIn and Facebook.