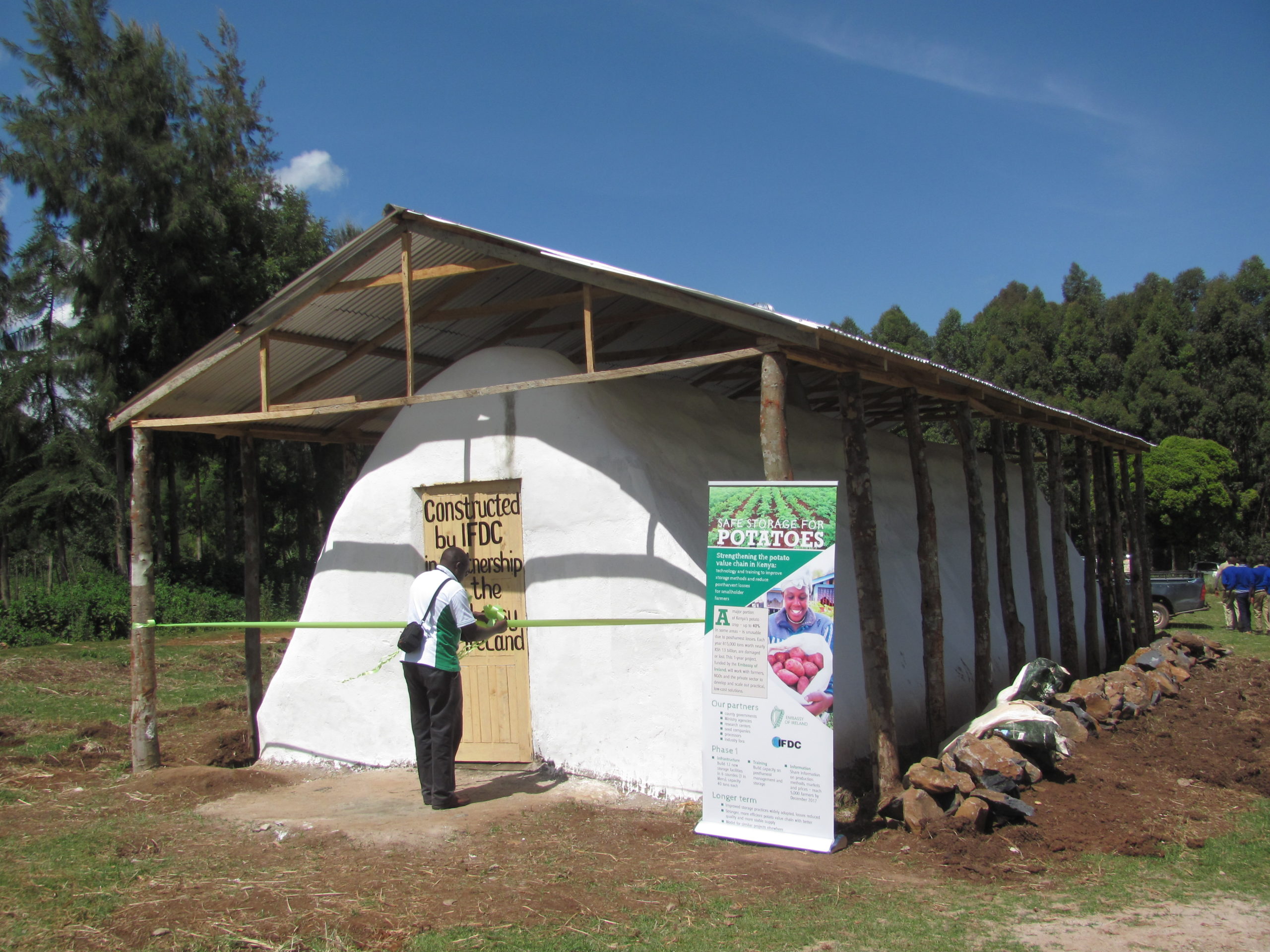 New potato warehouse in Timau, Kenya, constructed by IFDC in partnership with the Irish Embassy in Kenya.

A new IFDC-led project in Kenya, funded by the government of Ireland, will begin operations in January 2017. The project was announced by Ireland’s Minister of State for the Diaspora and International Development, Joe McHugh, on November 29. It will connect small-scale potato farmers to new technologies and new markets and will work with government, non-governmental organizations (NGO), and private sector partners to strengthen the potato value chain.

Potato is Kenya’s second most important food crop (after maize), but the value chain is weak. Producers lack quality seeds, traders, and processors are unable to source consistent volumes, and consumers struggle with large seasonal variations in quality and price.

The one-year, €120,000 project builds on a previous phase, also funded by Irish Aid, under which low-cost storage facilities were built in six counties across Kenya, and 600 “lead” farmers were trained. The new phase will focus on 12 producer groups that own the stores built during Phase I, helping them scale up production, with specific varieties for specific markets. Additional stores will be built in nearby areas, creating a critical mass of product, skills, and services – and impacting the potato industry countrywide. Activities will cover six counties – Bomet, Kiambu, Meru, Nakuru, Nyandarua, and Nyeri.

The project will share staff and resources with the Netherlands-funded 2SCALE project, also led by IFDC. Project partners include Kevian Kenya, one of the largest food processing companies in East Africa, national and county governments, farmer organizations, and development agencies. IFDC and its partners will implement a limited number of interventions in production technologies, farmer training, and post-harvest management. Even more important, the project will link different players in the potato value chain to ensure that smallholder farmers have access to a stable, reliable market at fair prices.

Announcing the project, Minister McHugh stressed the importance of farmer participation and capacity building – both of which are central to the project approach. Capacity building, for example, will include seed multiplication, production skills, and post-harvest management for farmers, business training for farmers and agro-dealers, and even training for local artisans who will repair and maintain the stores. Farmer training will be led by government extension officers trained during Phase I. Another objective is to stimulate collective action – mobilizing farmers into groups, linking these groups to customers, and helping to to develop strong, stable management structures.

Dr. Vincent O’Neill, Irish ambassador to Kenya, was optimistic that the impacts would be significant. “I am happy the Irish government is part of this project,” he said. “It has a number of strong technical elements, but the most important thing is the community participation. This project is about people coming together to help themselves.”