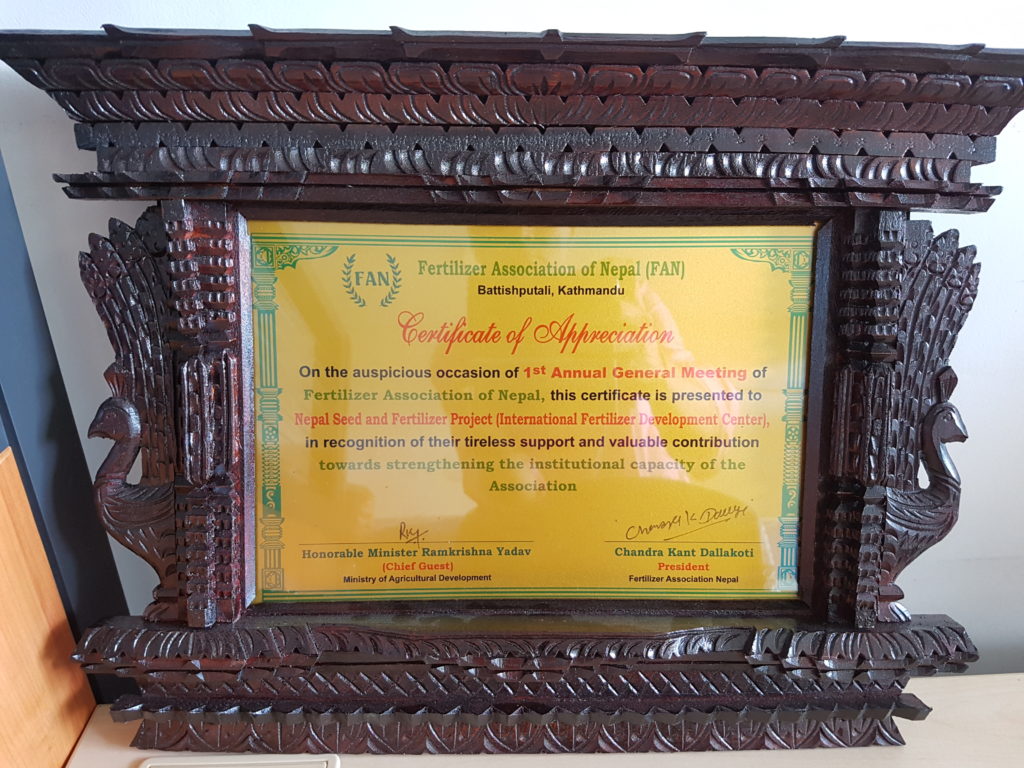 The International Fertilizer Development Center (IFDC) facilitated the organization of the first General Assembly meeting of the Fertilizer Association of Nepal (FAN) under the Feed the Future Nepal Seed and Fertilizer (NSAF) project in Kathmandu on August 29, 2017. During the event, project representatives from both the International Maize and Wheat Improvement Center (CIMMYT) and IFDC received a Letter of Appreciation from FAN acknowledging the project’s support in building the capacity of the association. Nepal’s Honorable Minister of Agricultural Development, Ramkrishna Yadav, presented the letter on behalf of FAN.

IFDC functions as a sub-grantee to CIMMYT on the project and focuses on fertilizer and integrated soil fertility management, market development, private sector engagement, public sector policy, and extension. NSAF is funded by the United States Agency for International Development (USAID).

The goal of the General Assembly meeting was to revive the defunct association and form a new executive body. For several years, the association could not function effectively due to stringent policies around private sector importation and distribution of chemical fertilizers at subsidized rates. NSAF, through IFDC, played an advisory role in this initiative and facilitated the process. Established and registered as the “Fertilizer Association of Nepal” in March 2015, the members have now proposed to rename it the “Nepal Fertilizer Entrepreneurs Association” (NeFEA). The constitution has been revised to align with political and economic developments in the country. The association nominated an Executive Committee comprising 17 members.

The event was attended by Minister Yadav as the Chief Guest, the Secretary and Joint Secretaries of the Ministry of Agricultural Development, the Director General of the Department of Agriculture, Chief of the Agro Inputs Company Limited, and Executive Director of AEC/FNNCI. In his remarks, Minister Yadav emphasized the need for both the private sector and the government to come together to address gaps in the fertilizer market.

Mr. Sharad Rai, IFDC Market Development Specialist with the NSAF project, worked with FAN and facilitated the organization of the first General Assembly meeting. He reported that NSAF will continue to support the association in areas of advocacy, institutional capacity building, and knowledge sharing and joint initiatives on relevant policy experiments.