Coming Together with 2SCALE: Part 2 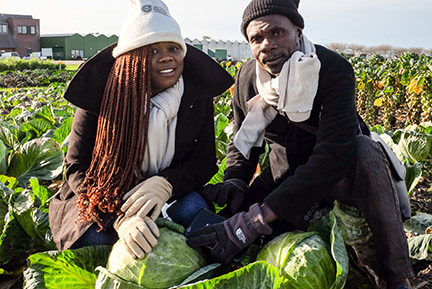 The Toward Sustainable Clusters in Agribusiness through Learning and Entrepreneurship (2SCALE) project is an inclusive agribusiness initiative funded by the Kingdom of the Netherlands and implemented by a consortium comprising the International Fertilizer Development Center (IFDC), the BoP Innovation Center (BoP Inc), and International Centre for development oriented Research in Agriculture (ICRA).

As a part of the 2SCALE 2017 Event, Incubating Inclusive Agribusiness in Africa, the speakers and honored guests of 2SCALE were able to visit several sites around The Netherlands to broaden their knowledge of the industry and participate in workshops.

The day after presentations were held, the group of agribusiness experts and farmers took a train through the Dutch countryside to visit The Hague. They sat in for a brief meeting with Rabobank — a source of funding for agriculture initiatives both in The Netherlands and abroad — toured the Binnenhof, and participated in a workshop hosted by AgriProFocus, which involved additional organizations and discussed real-life issues in African agribusiness and how to solve them.

The next day, the group toured the facilities at Bejo Seeds, a major seed producer, processor, and supplier. Bejo’s expertise in the seed industry is unmatched, and the group was able to discuss all aspects of the industry with Marcel Krimp, an international sales representative, who gave them a private tour.

After Bejo, the travelers visited De Aardappelboer — “The Potato Farmer” in English. The Potato Farmer is a small family-run potato farm owned and operated by Arwin Bos. The 2SCALE team learned about the history of this 100-year-old farm and its most recent efforts to supply specialty potatoes to local buyers and restaurants.

Finally, after several days of speaking and traveling, the 2SCALE participants returned home.