When You Know Your Market, You Do Better Business 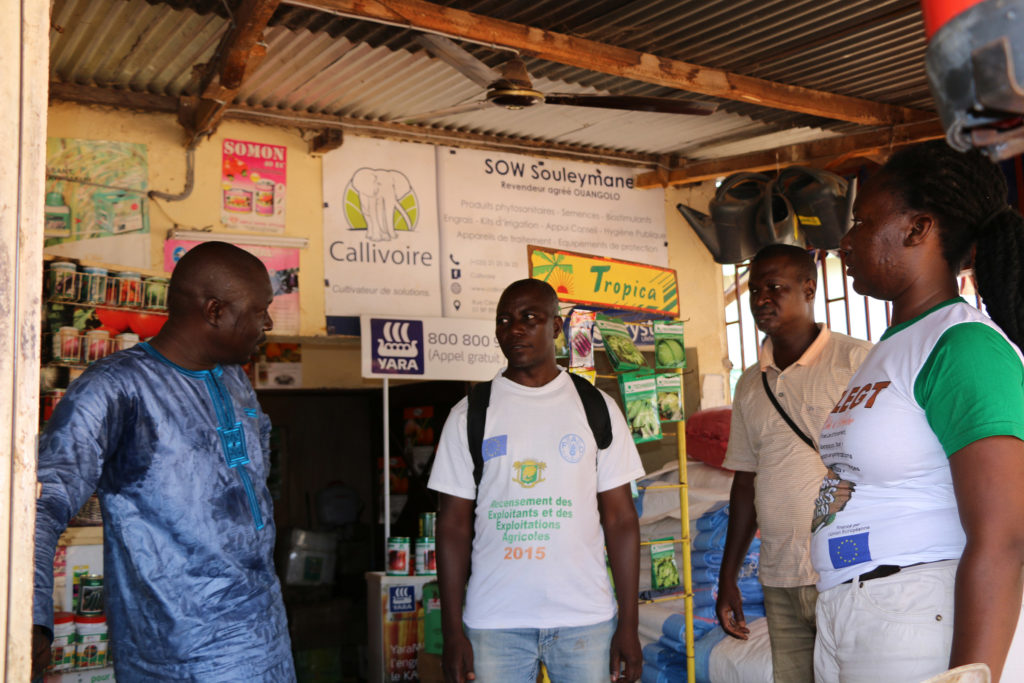 SOW Souleymane sells agricultural inputs in Ouangolo, in the northeast region of Côte d’Ivoire. Since June 2016, he has been a member of an Agribusiness Cluster (ABC) supported by 2SCALE in the framework of a vegetable Public Private Partnership. This cluster connects small producers, vegetable traders, input suppliers, microfinance institutions and business support offices located in the Korhogo region. In SOW’s view, this partnership is driving change in the vegetable sector in Côte d’Ivoire, but what are the changes?

2SCALE: Two years after initiating the market gardening partnership, how would you explain what an ABC is? How does it work, and what is the point of this business model?

SOW Souleymane: ABC means Agribusiness Cluster. It brings together inputs suppliers, producers, traders and sometimes microfinance institutions. It is all of these groups of actors that form the ABC. Why are we together? Because we need each other to do business. So we meet, we discuss, and we look together at how we can work. I am an input supplier, and when the producer does not have access to quality seed or fertilizer on time, it is not good for my business. The trader also has an interest in the producer having good harvests and vegetables that are both appealing and have a long shelf life. The micro finance fund is also there to “sell” money, but it needs to know that its investment is secure before giving credit, that is to say that producers know where to sell well before producing. In short, our interests are interrelated and for that reason, we need to talk to each other and facilitate the work. This is the interest of the cluster.

Since the creation of the cluster of OUANGOLO, what would you take for granted?

Before the start of the cluster, my turnover was 300-350,000 FCFA. Now, thanks to this relationship of proximity and trust built by 2SCALE, I can sell inputs for 3-4,000,000 FCFA. The availability of quality inputs has encouraged many women to begin vegetable businesses, especially with onions.

Beyond the turnover, what is the interest for an input supplier to be in partnership with other actors, especially small producers?

Having to do with organized groups, it reassures us that input credits will be paid more easily. We had a lot of problems with the individual producers. But with this partnership, trust sets in, and it makes a lot of things easier between us. It is more convenient to have grouped purchases. Now, we do have a campaign plan, which identifies the needs of at least 5 to 6 villages. Some village, Lassocourani, for example, tells us that it needs five boxes of onions, Naguebe purchases from us two boxes, Kawara plans three boxes, etc. This allows us to see what kind of seeds and fertilizer to order. When you know your market, you do better business: you buy according to demand, and you buy wholesale from large suppliers. So we can negotiate better prices, and we better manage the production campaign. Before 2SCALE, we were left to pay individually. You will pay 5 boxes; if it’s over, you will pay another 5 boxes. So, what do you see? But if you can directly order 2 million or 3 million, you undoubtedly realize savings.

In return, what friendly services do you provide to the producers?

First we make credits to the groups. Then, as the purchase is grouped, we sometimes move to deliver to the villages. When you give someone credit, you have to go and see what he is doing; and make sure he can pay the credit back, or not. So in this vegetable partnership, we know where the producer is, when he’s going to harvest, who he’s going to sell to, when he’s going to sell, etc. We also know what difficulties the producers are facing. We know which seed has a good germination rate, which other seed has failed, etc.

We collect this information on seed performance, and we ask the companies that produce them to come and see for themselves in the field. For example, last year, with RMG, we paid for seeds, which were supposed to have a 4-month cycle, but the producers told us it was a 6-month variety; which caused a problem of watering. When they came to see for themselves, they validated the producers’ report. Then, the company set up a demonstration plot to test the performance of a new onion variety. The women said, “Okay, we will wait to see, but in the meantime, we will try other products.” So we offered them alternative products, because we do not belong to one company. We belong to everyone. We follow the directions the producers show us. It’s up to the companies to come to demonstrate to the producers that their products are the good choice. We cannot buy from you because we work together in a partnership. It’s the very producers who say the quality of seed they want and depending on that, we make the orders. Because of this way of doing things in the cluster, there are some companies that have started doing demonstration and learning plots on onion, cucumber, lettuce, etc. This never happened here before 2SCALE.

Who benefits from this competition between firms?

Everybody. First, producers, because they now have a choice. Prices fall because of competition. But most importantly, firms now come to the field to gather information about their products. Before, they had the monopoly, and they were happy to sell without worrying about what is happening in the field. In addition, prices were not negotiable. You buy, or you go elsewhere. The choices were very limited. But this year, there were at least 3 to 4 new companies that entered the market. So, it’s total competition. It also means that Ivorians are motivated to go into the vegetable business. People are starting to become interested in the sector because the market is growing, that’s it, and people eat a lot of vegetables. Today, onion is much more eaten than peanut. Before at OUANGOLO, you could not see anything except peanuts, but peanuts fell by almost 60% to make room for onions. People are eating more and more vegetables because they know it’s better for their health.

In the past, all vegetable products were imported. Now, our traders buy locally with local producers who are involved in the cluster. We also see that the trader starts to finance the producer. Before, the producer sent his harvest to the market, and it was the traders who decided the price. How would they do? They had no choice but to sell, or to go back home with their products, still paying for transport and with the risk that the product will rot. Producers tell us today that with this partnership, they manage to negotiate in groups, and sometimes it is the trader who comes to buy. Today, in some groups, the trader himself participates in the financing of production.

Could this not be a straitjacket for the producer afterwards?

Not at all. They agree to sell at the market price, and if the trader does not offer a good price, the producer can always sell to the one who makes a good price and refund the money he borrowed. We are partnering in a cluster, but it should be fair for everybody. So, today, producers are starting to earn a bit. The traders also find their case because they are no longer obliged to go to Burkina Faso to stock up. This is less expensive and reduces lose on the road.

What are your challenges in the future?

2SCALE’s method, building partnership through the cluster, gave me a lot of experience in managing my business. Our cluster is about vegetables, but now, I have introduced the same system in cereals. Again, I no longer give credit individually. This allows me to avoid ghost credits. If someone comes to ask for fertilizer for his corn or money to spend the rainy season, I will ask him “What cooperative are you involved in? Where are you going to sell?” If he says to me: “I am in such a cooperative, there is no problem. I write his name, and I call the manager of the cooperative, we do the checks, we make the commitments and we close the deal. I know that if the credits are not paid, they will be deducted directly from the cotton money. The principle is that for each bag of fertilizer, I get two bags of corn. The business is safer. And for each bag of corn, the cooperative receives 500 FCFA. So the producers win, the cooperative wins, and I win. I do not even have to run after every producer. So, the cluster has given us experience. Groups are turning into formal cooperatives. We are experiencing big changes, really.

However, women need equipment, and especially land. Things cannot evolve as they should because women do not have access to land. That is why we are in talks with the local authorities, such as the Prefect, the Mayor and the local politicians so that women have access to the land and smart credit for the mechanization of their work.

Can politics and business do good?

You cannot be in politics without solving problems. It’s not the animals that will vote for you, it’s the women. If you claim to be a change maker, you have to prove it. You have to do something first for people before people do something for you. I do not even talk about donations. I am talking about facilitating small credits for women. We need barbed wire to protect the crops, because the cattle often destroy the crops of women. The civic duty of politicians is to help women develop too. If things go bad for women, they go bad for everyone.

Projects: Toward Sustainable Clusters in Agribusiness through Learning in Entrepreneurship (2SCALE)
Areas of Expertise: Food and Farming Systems
Share