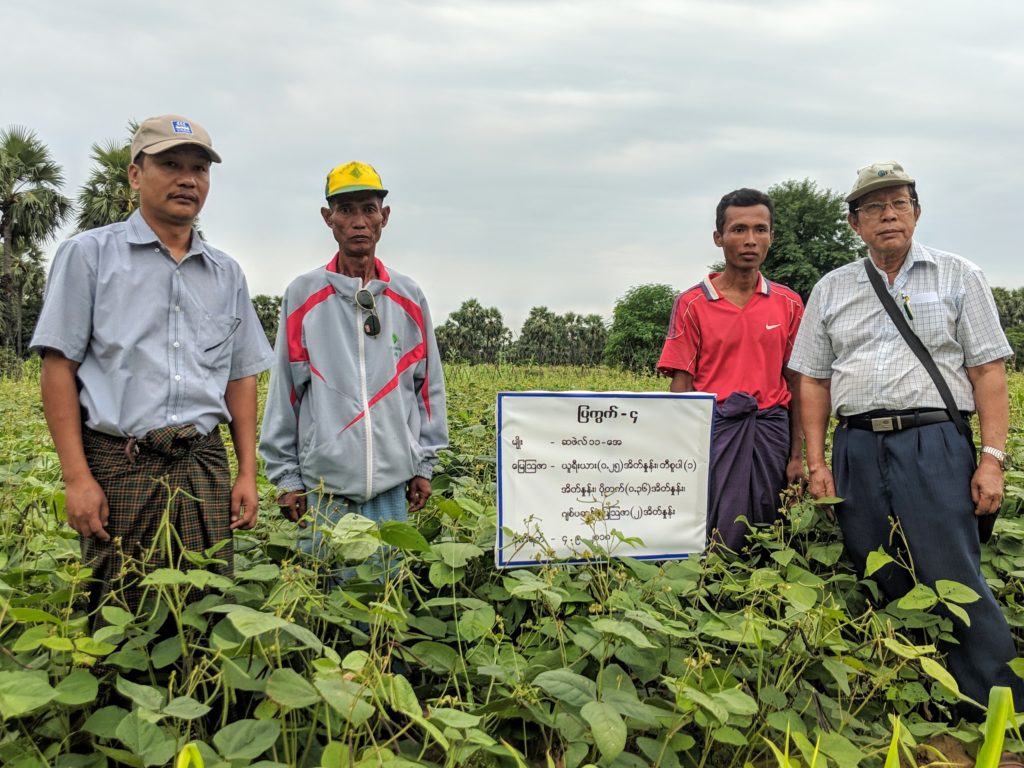 DOA and IFDC staff (left and right) stand with farmers (center) in a green gram demo plot in the Pakokku Township.

The Myanmar DOA is responsible for information dissemination regarding agronomic practices, plant protection, soil and water conservation, and plant nutrient management. The scope of responsibility and work is broad, and the DOA faces extra challenges because of restrictive budget resources. The DOA plays the lead role in nationwide programs such as good agricultural practices (GAPs) and integrated pest management (IPM), along with programs aimed at the effective and safe use of CPPs and promoting ways to cope with climate change.

The primary task of extension workers has been to collect data on crop acreage and harvests. Because there is little funding for staff to travel and spend time with the farmers, regular contact and advisory work have been minimal. Moreover, the pay is low, and promotions do not appear to be linked to hard work and to the comparative success of an agent’s client farmers.

There are about 255 extension staff and 60,000 farmers in the six townships covered by the DZ project. Each field worker is responsible, on average, for 585 farmers. IFDC’s Dry Zone Agro-Input and Farm Services (DZ) project proposed to engage the extension service as a technical adjunct to the input and service providers (ISPs). In addition to bureaucratic inertia, there was concern by a few in the AED about linking with agro-input dealers who were viewed by some as profit-seekers with little knowledge or regard for what was in the best interests of farmers.

The project therefore worked to gain the confidence of the extension workers by providing extensive training and reimbursing travel costs associated with the project activities. Most AED staff were willing to advance their knowledge and spend more time in the field with their farmer clients. They also saw the opportunity to spread the DOA messages during farmer trainings and field days being organized by the DZ project staff and ISPs. The following stories demonstrate the successes of this activity.

The DOA workers in Natogyi reported that the DZ project has helped them become more confident and engaged with farmers and ISPs than ever before. Officer Htyn Aung Kyaw said he conducted 11 demo plots with ISPs and participated in 54 farmer trainings and 10 field days. This is compared to zero activities in previous years. The extension workers said they now spend more time interacting with and transferring knowledge to farmers.

A major result is that many Dry Zone farmers, who had never used fertilizer before, are now applying balanced fertilizers and gypsum. Farmers are now reaching out to the DOA for help and advice. They regard the recent interaction among DOA, ISPs, and farmers as welcome and mutually productive.

The head staff officer reported that her staff is happier with the public-private partnership situation between ISPs, the DOA, and farmers. Through trainings and more interaction, her staff has been able to gain confidence when providing farmers with assistance.

U Than Htay is an assistant staff officer with the DOA in Pakokku township.  In 2016 he became involved with the DZ project.

Than Htay attended Agricultural Extension Division trainings provided by the DZ project. He received advanced technical knowledge on topics such as conservation agriculture, cropping patterns and systems, System of Rice Intensification (SRI), nutrition-sensitive agriculture, and more. The training instructors were retired professors from Yezin Agricultural University’s Department of Agricultural Research and senior officers from the DOA.

After participating in 40 farmer trainings, 30 demonstration plots, and multiple field days, Than Htay’s confidence in his farmer extension approach grew. Before, he had been afraid to appear before an audience, but now he is self-assured as he presents the agricultural knowledge he has learned to farmers. He uses a projector that private sector input and service providers (ISPs) donated to show farmers photos and video clips.

Than Htay meets frequently with the farmers in his assigned village. IFDC and ISP project activities enabled him to reach farmers even in the more remote areas where travel is difficult.

Farmers have begun to trust and rely on Than Htay. He shares his contact number with them so they can call him to get advice on high-yielding seed varieties and pest and disease problems. He also shows farmers how to make organic crop protection products. For farmers with mobile phones, Than Htay shares software applications so they can easily study agricultural techniques and information.

Than Htay and other DOA extension agents also are gaining the trust of ISPs. Before the DZ project, ISPs only visited the DOA office for their required registration to be able to sell fertilizer and  crop protection products (CPPs). But now they come to the office for extension activities.

The linkages, friendships, and respect between DOA agents and ISPs are stronger than ever.

The project conducted FGDs with the DOA staff in each of the townships during May 2019 as part of the final evaluation. The extension workers were very positive because the experience of working with the project and the ISPs contributed greatly to their overall confidence in establishing demonstration plots, public speaking, conducting meetings and training programs, approaching farmers, and transferring technology.

They also better understood crop options, seed quality, balanced fertilization, advantages of urea deep placement (UDP), effective use of  CPPs, and use of organic fertilizer and CPPs. As a result, farmers have come to trust and rely on the DOA advice, reaching them by phone with problems, and working with the workers and ISPs on seed production – and on the “business of farming.” In response, DOA and Green Way Myanmar launched a plant protection application for mobile phones, which enables farmers to learn about CPPs that can address their problems.

In short, the extension workers remarked publicly that they are more knowledgeable, motivated, willing to partner with ISPs, able to meet DOA planned targets, and satisfied with their jobs. 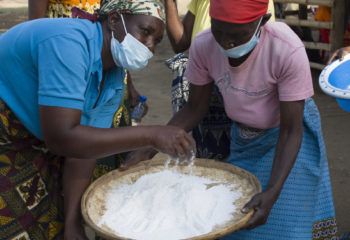