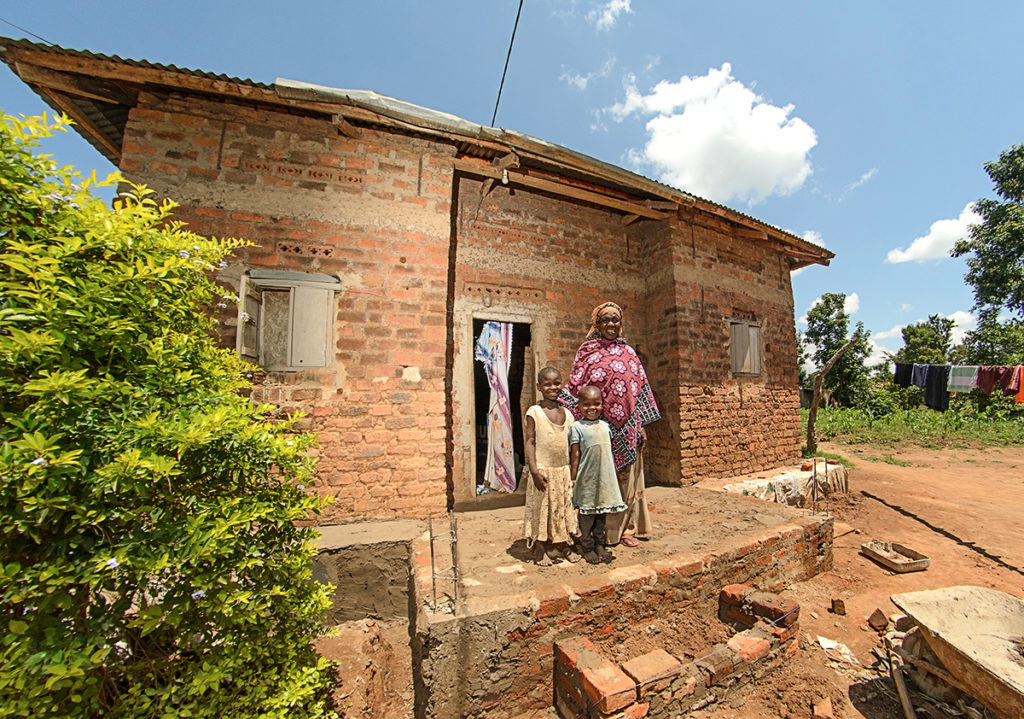 Jamila (pictured with her children) built a new home using money from her rice field.

A few years ago, Jamila Nabirye grew rice on a small plot of land near her home in Nakwijja village, Busolwe Town Council in the Butaleja district. Despite the effort she and her family put in, they could only harvest one or two bags of rice per season. She could barely sustain her family of 8 children by selling the 200 kg of rice she produced.

To end this cycle of low yields, Jamila considered hiring more land to expand her rice field, but such an idea was costly; she simply didn’t have the money. Consequently, Jamila opted to borrow from a bank, but she didn’t have collateral for the loan and could not afford to pay high interest rates.

When Jamila shared her dilemma with members of her farmer group, Geshaho Farmers’ Group, she realized that other members of the group shared the same plight.

“I sold 20 bags of rice and got money to plaster my house, buy a cow, and support my family’s basic needs. I also managed to pay school fees for my children.”

In 2019, IFDC, through its Resilient Efficient Agribusiness Chains in Uganda (REACH-Uganda) project connected with the Geshaho Farmers’ Group and linked them with the Microfinance Support Centre (MSC), which provides farmers access to agricultural loans and group loans with low interest rates.

To Jamila and the 40 members of her farmer group, this was a great relief.

“I was able to expand my rice field from just a plot to one acre with a loan of 3 million Uganda shillings that I got from the Microfinance Support Centre through my group,” says Jamila. She also noted that she has already seen a large difference in her crops’ yield.

Jamila could not hide her excitement as she explained that she harvested 20 bags of rice from the one acre she had hired during the previous season. “I sold 20 bags of rice and got money to plaster my house, buy a cow, and support my family’s basic needs. I also managed to pay school fees for my children.”

Malingi John Joshua, the Secretary of Geshaho Farmers’ Group says their organization, which started off as a home saving group for social support and emergencies, grew from village saving to parish saving and now has membership across the entire Butaleja district. “Last year, the Microfinance Support Centre gave us a loan of 30 million, which has already been paid off, and we applied for another loan of 60 million shillings which is being processed,” says Joshua.

Additionally, he says all of the Geshaho Farmers’ Group members have already reaped the benefits of not only the loan but also the trainings they undertook prior to being issued the loan.

“We used the money to acquire 20 acres of rice fields and produced 20 tons of paddy. Our members were also trained on financial literacy and on good farming practices, which really helped our members,” he says, emphasizing that these services helped them utilize the money properly while the new practices increased their yield.

The benefits from these loans will reach 3,600 farmers from 360 farmer groups in 17 districts of Eastern and South Western Uganda and will result in an estimated additional income of more than US $2 million for the farmers.

Joshua attributes the success of the farmer group to cohesion of all members as he says that they do everything as a group – clearing the fields, planting, weeding, harvesting, drying, and even selling their paddy to Diners Group, Ltd., another REACH project partner linked to Geshaho Farmers’ Group. Diners Group transports and mills paddies for the farmers at low rates to increase the farmers’ profit margins.

The Uganda National Financial Inclusion Strategy envisions that, by 2022, all Ugandans will have access to and utilize a broad range of quality and affordable financial services.

The REACH project, funded by the Embassy of the Kingdom of Netherlands, aims to address this gap, increase access to financing for farmers, and strengthen agribusiness in the rice sector.

Jamila is one of the first 120 farmers from six farmer groups to receive loans totaling 108 million shillings through the partnership between the REACH project and MSC. MSC aims to enhance the productivity of market-oriented farmers in rice and potato value chains by addressing the barriers of access to finance for farmers through expanding group loans to help farmers make investments for increased yields and profitability.

Although MSC was already reaching out to farmers through cooperatives and farmer groups, the support center’s coverage was limited. To increase this reach, IFDC assisted in the recruitment of four agricultural loans officers to double MSC’s reach from 5 to 10 groups per month and shorten the time for loan disbursement. Community extension workers were also trained to help farmers distinguish between good and poor crop management, fake and genuine agro-inputs, and poor post-harvest handling.

The benefits from these loans will reach 3,600 farmers from 360 farmer groups in 17 districts of Eastern and South Western Uganda and will result in an estimated additional income of more than US $2 million for the farmers.