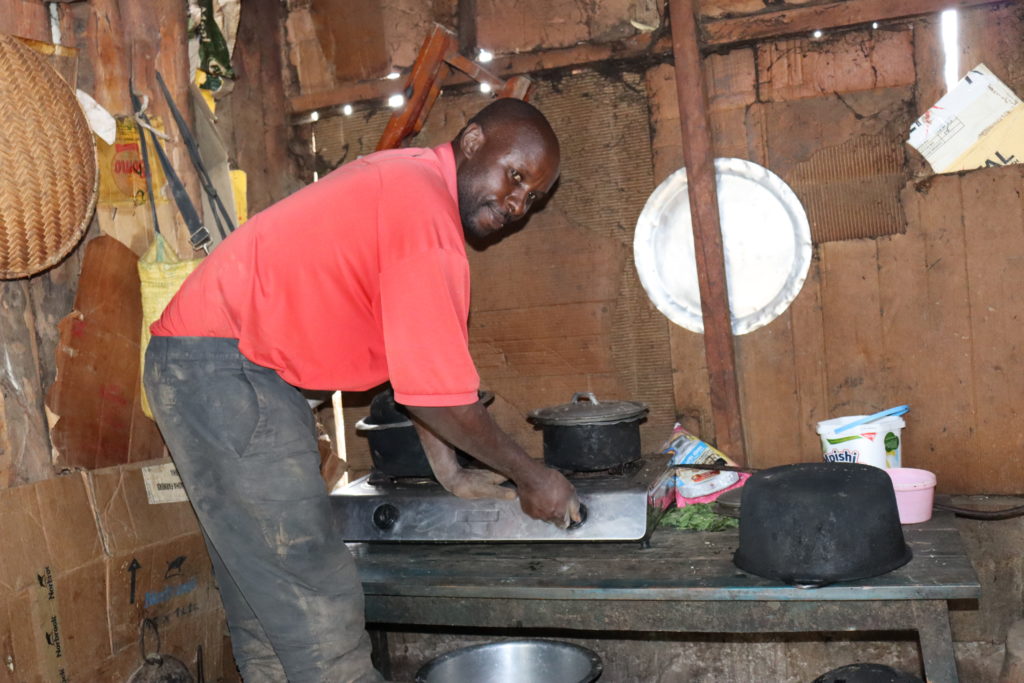 The interior of Kanjuiri Ridge, situated at an altitude of 7,540 feet, is the heartland of Nyandarua, one of the few places in the county where large farms still stand. Most families have more than 50 acres land. After a long period of drought, the rains finally started, and farmers got busy on their farms planting potatoes, maize, and beans. Pyrethrum cultivation is also becoming popular, and many farmers have allocated some land for this. From the look of things, this is a productive land.

On this chilly Friday afternoon, we finally arrived at Joshua Wairegi’s house after a 14-kilometer ride on a motorbike from Tumaini Center. Despite the area’s reputation as the food basket of Nakuru, Nyandarua, and even Nairobi, the roads are rough and unforgiving, especially during the rainy season.

Our host takes us for a tour of his farm, starting with a recently installed solar power system that fuels his home and electronic equipment, including his milk chiller. He also shows us the dairy sections, the biogas system, and his lush 4 acre potato plot.

In Kanjuiri Ward, farmers are hardworking. They have large areas of land, averaging 5-10 acres per farmer. But even though rainfall has been adequate, the harvest has not been good. Most farmers grow potatoes using techniques they learned from their parents, who saw potato farming as a way of life. They are unaware that certified potato seeds exist; instead, they recycle seed or buy it from their neighbors. Fertilizer use is for the few who have extra resources; however, they still record poor harvests because they use the same fertilizer year after year without seeking expertise on the condition of their soils. This has led to soil acidification, which greatly hinders potato growth. Not many farmers practice rotational farming, nor do they test soils for diseases, pests, or nutrient levels.

Despite working hard to better their lives, farmers only realize low yields, limited incomes, and degenerated soils. We now learn the struggles these farmers face: the lush green fields are misleading. While farmers have many factors in their favor, they lack the skills and knowledge on good agricultural practices.

Wairegi and 15 other farmers formed the Sunrise Farmers Group in 2020 on the advice of their ward agricultural officer (WAO). The WAO initially informed them about the potato farming training offered by IFDC, in partnership with the Nyandarua County government. This training is part of the Irish Aid-funded Potato Value Chain Capacity Building (PCB) project, a four-year project (2018-2022) that aims to improve the incomes and livelihoods of potato farmers in Nyandarua County.

The WAO helped the group identify a suitable site for a demonstration plot. They were trained on how to identify an ideal site for potato farming, observing key attributes such as drainage and recent land use. The officer also discussed soil testing, its importance, and the process of soil sampling.

Over a period of 15 weeks, Wairegi and his group met at the demonstration site once a week to learn together. The lessons involved practical activities, such as identification of diseases and pests, proper use of crop protection products, hilling, harvesting, sorting, grading, and potato utilization. Though the training was lengthy and demanding, Wairegi says this was an eye-opener for him.

“We were amazed by the results from the demonstration plots. We discovered the benefits of using the right inputs at the correct rate and at the right time, the need to invest in certified seed, and above all, how recordkeeping helps farmers determine the best price to sell their produce,” says Wairegi.

“Before the training, I harvested 4 metric tons of potato per acre. This year I implemented the news skills and practices from training, and I harvested 16.5 mt. I later scaled up to 2.5 acres and harvested 53 mt,” Wairegi notes.

“This was the turning point for me. I prepared an acre of land and dutifully practiced what I learned, regularly consulting the extension officer, local inputs agents, and IFDC agronomists. The pleasant surprise came at harvest time! Before the training, I harvested 4 metric tons (mt) of potato per acre. This year, I harvested 16.5 mt after using the new skills and practices. I later scaled up to 2.5 acres and harvested 53 mt,” Wairegi notes.

The produce was admirable, and many buyers from Nakuru expressed interest in purchasing his entire harvest. He eventually sold to a wholesaler based in Nairobi at Ksh 22.7 (approximately U.S. $0.21) per kilogram. Wairegi has established a good rapport with this trader, who also bought produce the subsequent season.

In addition to potato farming, Wairegi is also a dairy farmer. He bought three cows using the income he earned from potato farming, hoping to upgrade his herd. He gets an average of 20 liters per cow. Wairegi is a member of the Mawingu Dairy Society, which collects milk from farmers on behalf of Brookside Dairy Limited. The company buys their milk at Ksh 38 (approximately U.S. $0.35) per liter, and they pay farmers at the end of every month. Wairegi makes more than Ksh 68,000 (approximately U.S. $628) per month, and he uses this income to supplement his potato farming revenue.

With the proceeds from potatoes and milk, Wairegi’s livelihood has changed. He was able to build a biogas system and install solar power in his house, which helps run a milk chiller. This chiller allows Wairegi to preserve the evening milk, awaiting collection the following day. He has also procured building materials and intends to build a three-bedroom house.

Wairegi has consistently scaled up his farming. Currently, he cultivates potatoes on 4 acres, and he anticipates harvesting more than 66 mt. With the improved profits from potatoes and milk, Wairegi will finally be able to start building a house for his family.

Thanks to the training implemented by the PCB project, the Sunrise Farmers Group now understand that fertilizer, if used properly, is for everyone. The Nyandarua community can now rightfully claim their title as the food basket of Kenya as they begin to see their farms flourish.