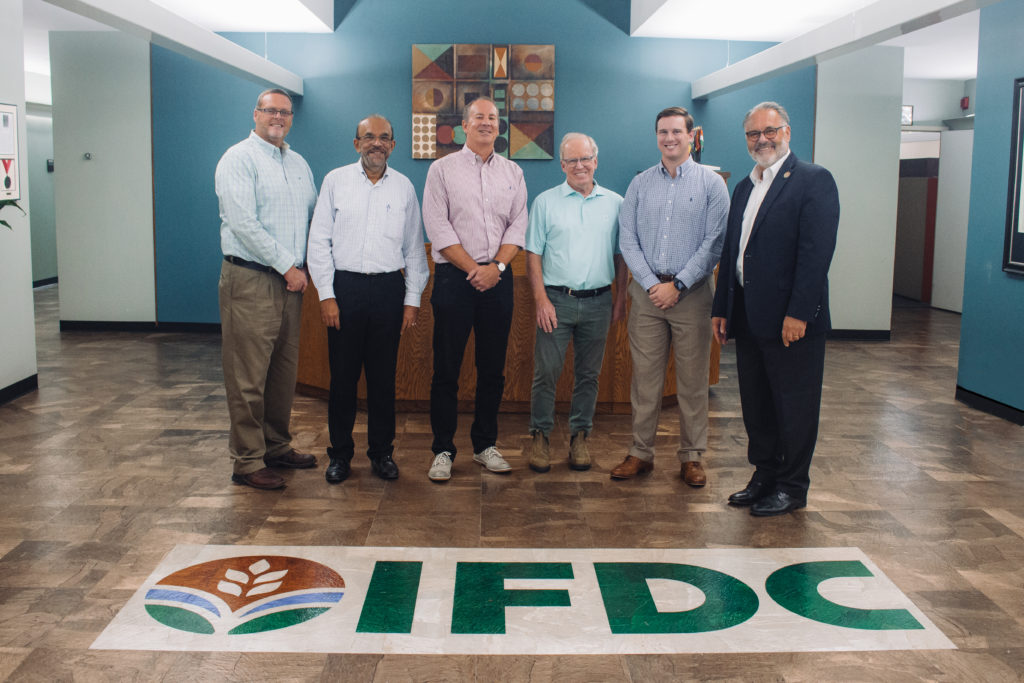 “IFDC was pleased to welcome Pursell Agri-Tech to our headquarters today and to receive the company’s generous donation. We are ever grateful for Pursell Agri-Tech’s decades-long commitment not simply to IFDC but to improving global agriculture. Achieving zero hunger through efficient food systems and technologies is our common goal. ” –Albin Hubscher, IFDC President & CEO

“Our company would not exist without IFDC. We are very pleased to donate the cash proceeds from this award to IFDC’s great research.” -Taylor Pursell, Chairman, Pursell Agri-Tech

The Pursell family has been in the fertilizer industry since 1904. The company started with humble beginnings, serving small agricultural markets in central Alabama. By chance, Sylacauga, Alabama, also happened to be close to Muscle Shoals. Beginning in the 1950’s, Howard Parker (my grandfather) and Jimmy Pursell (my father) began making regular trips to Muscle Shoals to learn about exciting new fertilizer technologies. Over time, our company became something akin to a guinea pig for IFDC, often being the first to test new fertilizer technologies they had developed. I personally unloaded (by hand!) the first rail car of Sulfur Coated Urea (SCU) shipped from NFDC when I was in high school. My first visit to NFDC/IFDC was over 50 years ago also while in high school!

I have been fortunate to have worked very closely with IFDC for decades. I have learned so much from their talented scientists and management. I have traveled to Bangladesh and Vietnam with IFDC to personally visit field offices (they have offices in over 25 countries) and the smallholder farmers they serve. I have watched these farmers grow rice planted by hand and with few resources. Most importantly, I have personally seen the impact new IFDC fertilizer technologies are making on poverty, hunger, and malnutrition in developing countries. The yield increases these farmers are achieving is literally changing the lives of so many families. Millions of people are alive today due to the great work of IFDC.

Pursell Agri-Tech is very humbled to have received one of the EPA/USDA Next Gen Fertilizer Innovations awards. Our company (and the predecessor companies) would not exist without IFDC. We are very pleased to donate the cash proceeds to support IFDC’s great research.