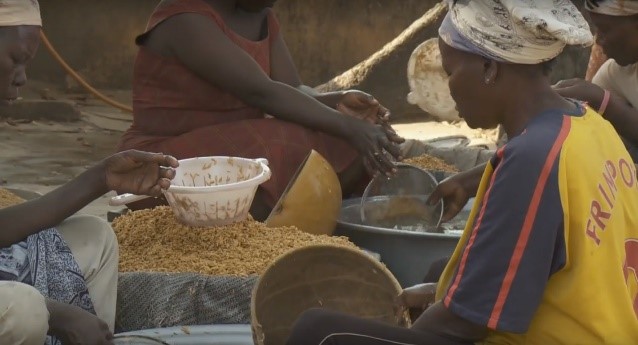 ESOP is an agricultural cooperative in Lalo, Benin, that purchases rice from small-scale producer groups for grading, packaging, and resale. The key step is hand-sorting to select the best grains for premium markets. Sorting is done mostly by women at very low wages.

To address this problem, the 2SCALE team in Benin first examined costs and margins to understand whether ESOP and other processors could afford to pay more. Grading accounts for only 6 percent of processing costs – implying that higher grading costs (higher wages) will not seriously affect the company’s profitability.

Next, 2SCALE contracted a study to understand the wage structure and gender-based separation of tasks. Sorting is done almost entirely by women, while men are responsible for other tasks, such as de-hulling and packaging. Hand-sorting is taxing and laborious, but the women earn only U.S. $2.16 per day on average. ESOP’s male staff, doing similar jobs, earn more than $6.92.

The findings were discussed with the company management and with the women employees, first in separate groups, then in ‘plenary.’ The 2SCALE team, which moderated these discussions, used a soft approach, simply laying out the facts and leaving the decision to the company.

The result? ESOP increased the women’s salaries by 50 percent, from $2.15 per day to $3.24 per day. That is still only $80 per month, and gender disparities still remain. But the women are grateful that a beginning has been made.

“The money was so low, we had to often borrow from others just to meet our daily needs,” explains Lucienne Hossou, a rice sorter at ESOP. “That is why most sorters resign after a few months. With this increase, because of 2SCALE, we can breathe a little bit better.”

The 2SCALE project, funded by DGIS-Netherlands (2012-2017) with co-investments by the private sector, is improving agribusiness opportunities and farm livelihoods in eight African countries. The project is part of IFDC’s North and West Africa Division and East and Southern Africa Division.