IFDC presented three staff members with awards for their outstanding work on September 18, 2019, following the organization’s 45th Annual Board of Directors’ Meeting. Please join us in congratulating this year’s winners of the IFDC staff awards. The commitment, dedication, and talent of these three individuals is an inspiration to us all, and we thank them for their outstanding service. 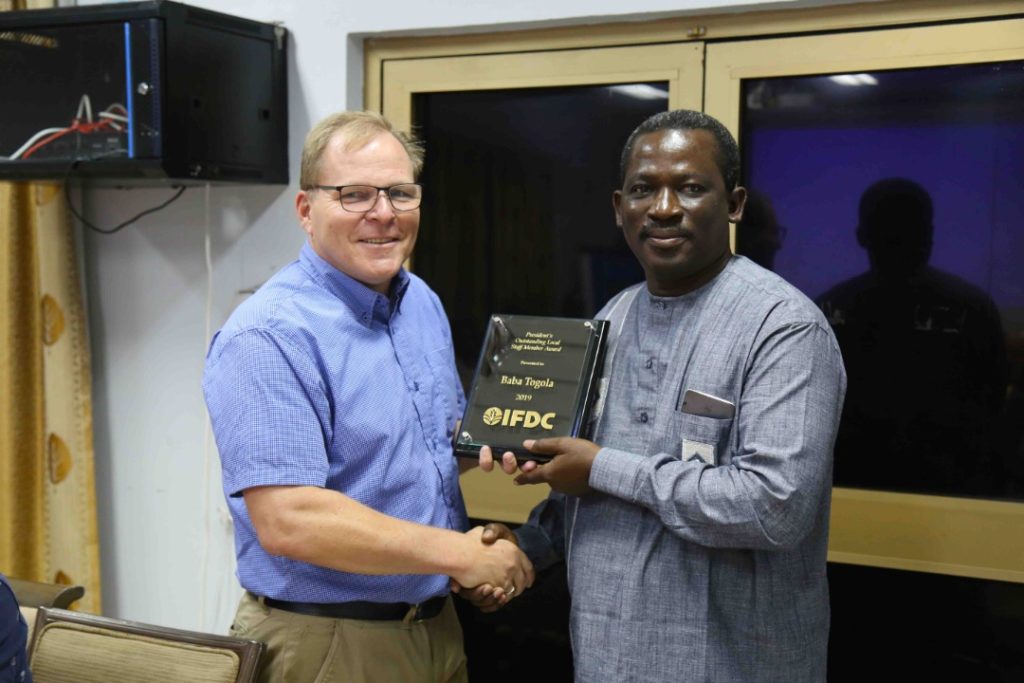 Mr. Baba Togola holds a Master of Science as a livestock specialist and a degree in local development and decentralization. Baba has 28 years of experience in agriculture and rural development. Baba joined IFDC in June 2012 as a Cluster Advisor at the beginning of the 2SCALE program and built on his rich experience to support inclusive agribusiness models through the 2SCALE program. In 2018 Baba became the Staple Crops Industry Team Leader, supporting 2SCALE partnership facilitators in six countries of West and East Africa. In this position, he strengthened the expertise in staple crop sub-sectors while providing leadership to the 2SCALE/IFDC team in Mali.  Since early 2019, Baba has served as the Country Team Leader for 2SCALE in Mali coordinating staff from IFDC, BoPInc, and SNV, promoting harmony between consortium members and ensuring consistency of 2SCALE’s approach in Mali.

Baba has shown thought leadership in embedding agribusiness initiatives in the local contexts and ensuring commercial viability and sustainability. Baba has also shown strong coaching skills, not only for his team members in Mali but also for 2SCALE colleagues in other countries that he invited to Mali for field visits, training sessions and co-facilitation of workshops. Baba also provides on-the-job support to other country teams to conduct analyses.  Moreover, Baba is recognized for his strong sensitivity to gender equality and women economic empowerment. The strategies that Baba proposes to ensure that the 2SCALE interventions have a social and economic impact on grassroots actors have impressed donors and government officials.

Baba remains loyal to IFDC because he believes strongly in inclusion and empowerment of grassroots actors in agricultural value chains.  He is also a strong team player who takes interest in the progress of 2SCALE beyond Mali and takes very seriously his roles as a mentor and coach for junior 2SCALE colleagues. Baba remains optimistic and strongly believes in the impact of IFDC’s work. He has proven to be a key staff for IFDC, especially in the context of increased focus by donors (such as DGIS) in Mali and the Sahelian region. 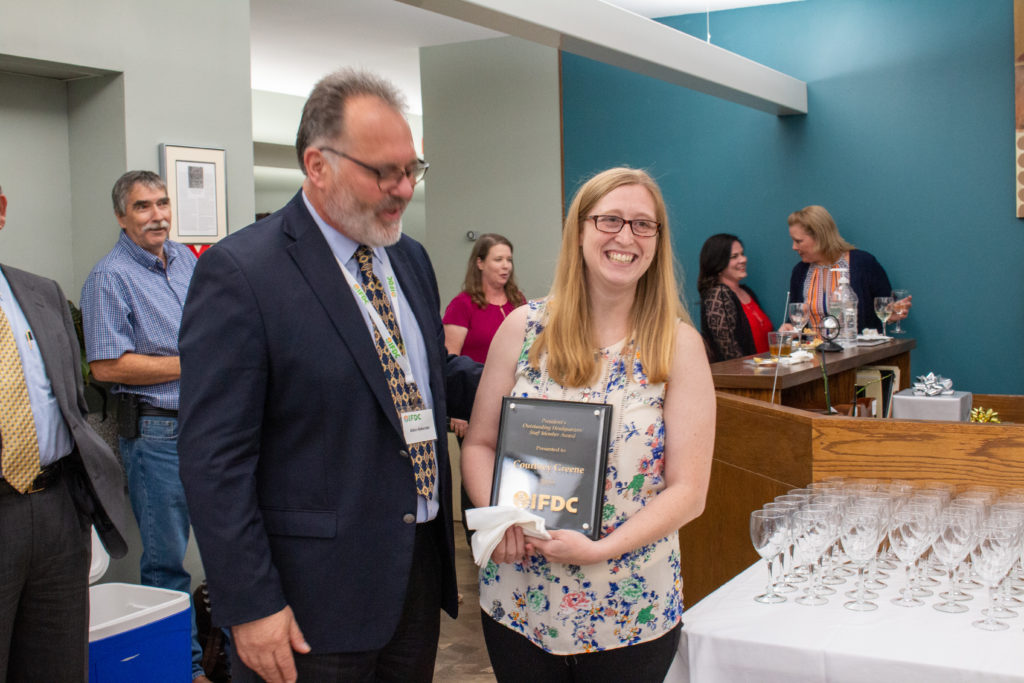 Mrs. Courtney Greene joined IFDC in June 1, 2007, upon completion of her degree in professional writing and journalism at the University of North Alabama. Since this time, Courtney has served in several various Communications roles, from social media and outreach to editing scientific papers and project proposals. She currently serves as senior editor for Communications, transforming proposals, scientific publications, and project reports into work that can be understood by mere mortals.

Courtney is diligent and offers creative solutions when helping others. She recently outdid herself with her work on the Ghana-based ATT project’s final report. After visiting the project, her first time traveling to the field in more than 10 years at IFDC, she worked with project staff to produce a report of the highest caliber, which not only captured the spirit and successes of IFDC’s work, but which was also a pleasure to read. IFDC’s standards overall have been set higher because of her efforts.

Courtney carries out her work with care and conviction. Whether at Headquarters or in rural Africa, Courtney brings a curiosity and thoughtfulness to her work. Critical to all Communications work, she asks good questions. She makes sure she understands a topic as fully as possible to ensure she accurately conveys IFDC’s story.

While she is known to be quiet, she has a passion for her work that shines through in its consistent excellence and her interactions with others. Sampson Agyin-Birikorang, IFDC’s Senior Scientist-Systems Agronomist at HQ, described Courtney as “one of the best people to be with and work with. I’ve worked with her at HQ and abroad,” he said. “She is always ready to help, even if it is outside of her field. And she never complains about editing my manuscripts! It is just a pleasure to work with her.”

Dr. Bocar Diagana earned his PhD in international agricultural development from Michigan State University. He also holds a Master of Science in production economics and a Bachelor of Science in economics and business firm management. Dr. Diagana has over 30 years of technical expertise in agricultural policy, technological transfer and value chain development, and project management.

He currently serves as a Regional Economist and Country Representative for IFDC’s North and West Africa Office in Senegal, where he provides technical input for fertilizer subsidy and fertilizer policy sector development. Since 2014, he has supported IFDC’s efforts to successfully acquire over $30 million in new program funding in Niger, Mali, and the ECOWAS region. As the Fertilizer Subsidy Policy Team Leader for IFDC’S West Africa Fertilizer Project, he analyzed existing fertilizer subsidy programs in eight West African countries and proposed appropriate interventions to improve current programs.

He has successfully quantified the economic impact of the technologies that IFDC has been developing to enable the institution to make a credible case for technology up scaling with donors and governments. Dr. Diagana is highly regarded by his peers as a leading agricultural economist and IFDC is fortunate to have him dedicated to its mission and values as we strive to radically reduce hunger and poverty.