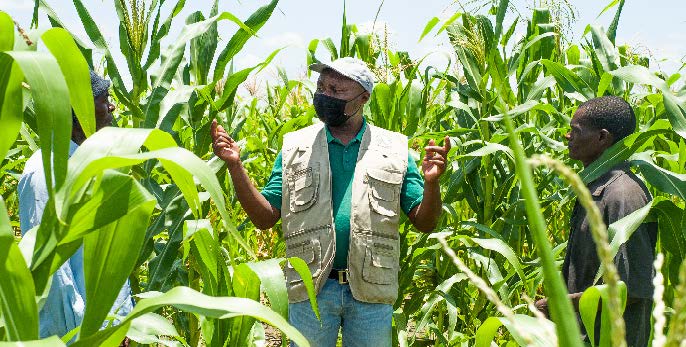 Despite being advanced in age, Fernando Mapinde walks with his shoulders high, as he shows off his maize field to a group of field officers. The field is a flourishing green, with maize crops towering over everyone. The cobs are well above those that the average farmer gets, and it is evident that good agricultural practices have reigned supreme. The well-manicured maize field is a successful project executed by a formerly unemployed and broken-down ex-combatant, who is now back on his feet, fighting against poverty through the commercial production of maize.

“I fought for all my life since the civil war started, and when the war ended, I found myself old and unemployed and with no means of survival.”

A civil war ravaged many rural communities in Mozambique from 1977 to 1992, ending with the signing of the general peace accord. War, by its nature, disturbs livelihoods and brings about starvation and loss of lives. When the war ended, many former fighters could not fully reintegrate into society and ended up living on the periphery with no formal employment opportunities.

“I fought for all my life since the civil war started, and when the war ended, I found myself old and unemployed and with no means of survival,” said Mapinde.

Mapinde is one of the 590 ex-combatants, 62 of whom are women, who formed farmer groups, assisted by the TEAMS program, and developed skills in agricultural activities.

Mapinde produces maize on a large scale and distributes it to vendors in Chiluva and Tica, Nhamatanda District, Sofala Province. Mapinde benefits from an inclusive market approach strategy developed by the TEAMS project, where market actors enhance capacity through linkages with input and output markets. “Through TEAMS, we have an agro-dealer here. She sells us all the inputs we need: seeds and fertilizer. I’m pleased, because we are producing large quantities due to the hybrid seeds. After harvesting, I distribute to vendors from Tica to as far as Inshope and still have enough left over for household consumption,” said Mapinde. These established linkages between farmers and local agro-dealers to output markets are setting a fast pace for growth of the agricultural value chain in this province.

The progress can easily be seen and felt by the improved household nutrition through increased food availability and dietary diversity from the different crop varieties being produced and sold at the local markets and roadside stands. One traveling from Beira to Manica cannot miss the thriving fields of maize and swarms of women selling cereals, vegetables, and legumes to travelers, indicating the efforts these ex-combatants have made in a new community.